The Mission of Kaltiainen Family Society

Family Kaltiainen has lived since the 17th century in Ilomantsi where the domicile of the family society is also based. The mission of the family association is to revive and maintain a sense of family togetherness cherishing the family tradition.

The history of the Kaltiainen family

Until the early 1900s, every Matti and Paavo has been registered Ilomantsi church records. Kivilahti village by the lake Koitere became the actual family recidence in the 1700s. All members of the family originally come from the house of Kaltiala in Suukylä, Kivilahti. Family branched out in the 1860s, when Staffan moved to Riihivaara and Johan stayed in Suukylä. After the change of houses between the two brothers, 'Tahvolaiset' (the descendants of Staffan) and 'Jussilaiset' (the descendants of Johan) were born .

Small number of Kaltiainen family lives in Kyyjärvi, which is a municipality in Central Finland. They have the family surname, but the biological connection to the family in Ilomantsi has yet to be found.

The descendants of the Ilomantsi family branch, Toivo and Yrjö Kaltiainen, as well as their sister Aune Turunen became interested in family history in the 1950s when Toivo's brother Emil gave the old documents of Suukylä to Toivo. The documents had been kept safe since the early 1800s.

In the beginning of the 1970s Taisto Kaltiainen (the descendant of Staffan) and Tauno Kaltiainen (the descendant of Johan) visited relatives and also made some phone calls to find out if there would be more interest in the establishment of the Family Society. Tauno and Taisto arranged a family gathering and the Kaltiainen Family Society was established in Lieksa on 5th of July in 1975. Rules of the society were established, the chairman and the members of the Family Council were elected. 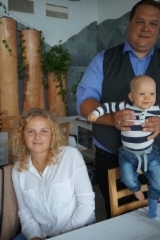